In a troop that has been around as long as Troop 890 there are many stories.  Some funny, some about traditions and some inspiring.

Here are stories from Scouts and Scouters from Troop 890 over the history of the troop. 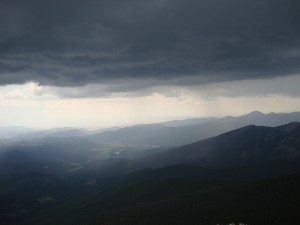 the time) happened at Philmont. We had planned a day hike to the top of Baldy Mountain hoping to enjoy the scenery for a bit before leisurely hiking down back to camp. As we hiked up we noticed that the clouds surrounding the mountain became darker and more numerous. By the time we reached the summit the sky was completely overcast and the most menacing of all the clouds was sitting directly over Baldy Mountain.

There were no trees to block the wind, cover us from the rain, and most important, we were the tallest things on the mountain making us perfect biological lightning rods. 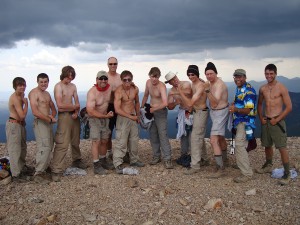 Since mother nature often has a sadistic sense of humor, we got to experience all of those bad outcomes and more. About 15 minutes after reaching the summit and taking the pictures to prove we had made it we heard thunder off in the distance and made the decision to return to the base of the mountain. Almost as soon as we made that decision and had begun to hike down the loose shale that covers the peak it began to rain on us. One minute after that it began to hail.

Not wanting to be pelted continuously by BB sized hail, we transitioned from hiking to running down the mountain, which due to the type of rock covering it, soon further transitioned into more of a skating/trying not to fall motion. The entire time between the summit and the treeline the hail only worsened and the lightning only got closer. But thankfully, the same distance that took us forty-five minutes to ascend, only took about five minutes to descend.

Upon reaching the treeline and finally getting our wits about us, we entered into the 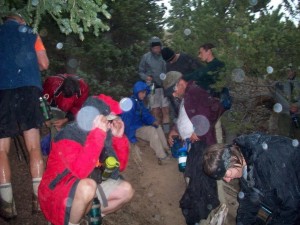 After what seemed like an hour the hail stopped, the rain slowed to a drizzle, and the thunder was reduced to a faint rumble in the 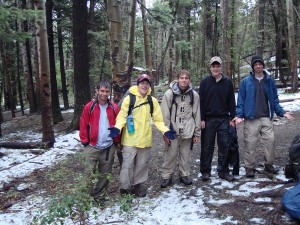 distance. We trudged down the mountain on a now muddy trail until finally reaching the base camp an hour later. We all regrouped, recuperated, and finally had a good laugh about the whole experience. And that was one of my most memorable moments in scouting.

Great website and congratulations to all 500 Eagles! I believe that I was the 5th Eagle in 890 and Gary, my little brother, was the 12th. Our Dad, Grant Hammond, became the scoutmaster and some of the best times of our lives were the times we spent as scouts. It has been over 50 years since we first joined Troop 890 and it fills me with pride that the children and now grandchildren of my fellow scouts are or have been members of the troop and many of them became Eagles. The leadership skills, teamwork, and perseverance learned by reaching for the heights to soar with the Eagles will give you a step up in this world as you go on to future endeavors. I am proud to have been a member of such a magnificent team as Troop 890! If anyone is interested, we inherited a large box of troop records, photo slides and other items from my Dad and we would love to share this back to the troop if you have place to archive it.

Becoming a member of Troop 890 has been a rewarding experience. Serving as Scout Master from 2010 to 2012 provided many memorable experiences and accomplishments. One of which I am extremely proud of is the completion of the Meador Pavilion at Camp Constantin.

Throughout its history, Troop 890 has had a tradition of service and giving back to Scouting and the community. It has become an 890 tradition for the troop to complete a service project during each summer camp that it attends. Neither BSA, Circle Ten nor Camp Constantin requires this, but it is part of the troop’s heritage and legacy to provide something for others t enjoy. Back in 2007 the Troop Committee under the leadership of then Scoutmaster Brett Chumbley challenged the troop to fund and build a pavilion at the Eagle Wing Campsite in honor of long-time 890 adult leader, Norm Meador. 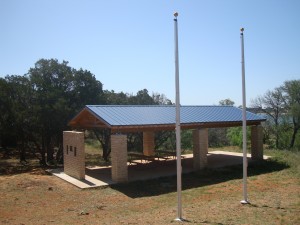 Mr. Meador spent over 40 years mentoring both Scouts and adult leaders of Troop 890. He was a regular at the Monday night troop meetings and summer camps throughout his life. Anyone who was part of the troop came to know and respect all the efforts he put into upholding the Scout Oath and Law in everything he did. It was at the Troop’s 50 Anniversary Celebration in 2011 that plans were announced to complete the construction of the Meador Pavilion by the summer of 2012. In true 890 fashion, a fundraising campaign was completed that procured over $45,000 for the construction of the pavilion, which was then completed as promised in May of 2012. Unfortunately Norm Meador passed away in the spring of that year and never got to see the structure erected. He did, however, get to see the plans for 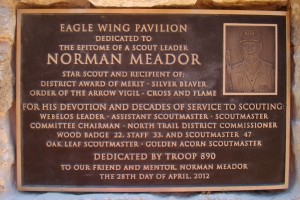 the pavilion and was recognized by the US Congress, City of Dallas and the State for Texas, as well as featured in local news stories for his years of service and for the pavilion being built in his honor. There are three plaques installed at the pavilion, one to commemorate Norm’s lifetime achievements, a second that recognized the Eagle Scouts of Troop 890 that made donations to the project, and a third that thanked the major financial contributors. The pavilion will be a structure that many will enjoy for years to come and serves as a memorial to the epitome of a great Scout leader.

One of my most memorable experiences will always be helping young scouts go over the edge of cliffs and rappel down the side. One of my favorites was young Hunter Gordon, a usually fearless kid who upon approaching the edge, began to panic, then trying to get over the edge he began melting into tears and snot. Once he finally got a few feet down, the looked up and shouted this is EASY, then promptly ran back up to do it again, and again…

Summer camp is mostly about fun and learning.  It can also be about service.  One year near the end of camp, the Scouts’ morale was down due to some incidents around some of the 890 traditions. Instead of pouting a 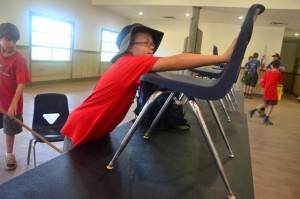 bout it the Scouts decided to start a new tradition. On Friday of summer camp they volunteered to clean up the dining hall for all the campers as a show of service and scout spirit.

There was a big cheer from the other campers when this was announced.  What came next is one of my favorite camp memories. 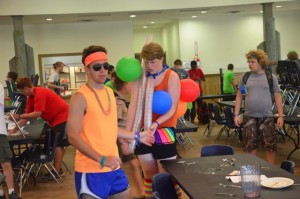 The Scouts put some music on the PA system and proceeded to clean up the dining hall as promised.  To a Scout they were all busy cleaning, singing and dancing all the way.  Seeing the boys take a negative situation and make a fun positive out of it is what Scout spirit is all about.   They continue this tradition every year with the same spirit.